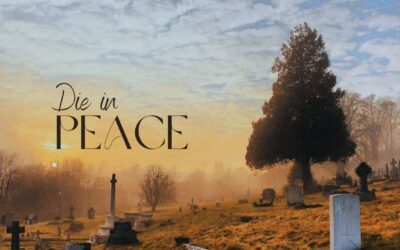 Death is the enemy.

Every age, every culture fears death. The rich, the poor, the powerful, the weak — all people in every corner of the earth know that death is our greatest enemy. Death takes our loved ones. Death shatters hopes and dreams. Death reduces living, breathing, intelligent, joyful, loving persons to lifeless, decaying corpses.

Many would say, “Death causes fear, and fear is the opposite of peace, so peace is impossible because death is everywhere! How can anyone have peace knowing death could come at any time?”

Perhaps those who would say these things should reconsider their opinions because of what happened in history. You have heard of Jesus the Christ…the man around whom history is calibrated.

He once went to a funeral.  He stood by the tomb of his friend named Lazarus. He saw the sisters of Lazarus weeping. He saw the friends of Lazarus who were gathered there also weeping. And he was deeply moved in spirit. And then, Jesus wept.

Why? Those standing there saw Jesus weeping and said, “See how he loved him!” That’s right! Jesus wept because of his love for Lazarus, and for his family, and for his friends. It was as though Jesus wept for all of us — for all who live in the fear of death.

As Jesus looked at that tomb, he knew that no one could have peace in life because of the fear of death. As he looked at the mourning family and friends of Lazarus, he knew that death steals the peace of those who are separated, by death, from the people they love. Those who are left behind don’t know what happens after death — they don’t know where their loved ones have gone. Perhaps they have ceased to exist entirely. Jesus saw that death is the enemy — the enemy of every person…

But, Jesus is the enemy of death.

So, imagine the surprise of everyone there when Jesus told the sister of Lazarus, “Your brother will rise again.” But, Jesus had something even more amazing to say. He said to her, “I am the resurrection and the life; he who believes in Me will live even if he dies, and everyone who lives and believes in Me will never die. Do you believe this?”.

How would you answer that question? How would you respond if you were standing at the funeral of your own brother?

Jesus did not go to that funeral just to weep, or just to talk. He went to that funeral to make a point at that burial tomb. So, after he told those standing nearby to remove the stone which was in front of the tomb, he issued an amazing command — three simple words — perhaps the most shocking words ever spoken at a funeral:

Can you imagine? It’s like saying, “Climb out of the casket!” Or, “Rise out of your urn!” It’s impossible!

But with the Lord Jesus as Lord of death, the God of life, it was not impossible. Remember? “He who believes in Me will live even if he dies!” It happened! Lazarus lived — even though he had died! Lazarus had been dead for four days, but at the command of Jesus, he walked out of his tomb! Alive!

That is why Jesus died. In his death, he paid the price for our sin and the cost of conquering death, making it possible for every person to have eternal life beyond death. Jesus also promised that someday, he would eliminate death entirely. Death, our human enemy, has been decisively conquered, and one day when Jesus returns, death itself will be no more.

So, is it possible to live — and die — in peace? Yes! Think about the question Jesus asked the sister of Lazarus: “Do you believe this?” It is possible to have peace in the face of death, but only if you will reply to Jesus, “Yes! I do believe this!”