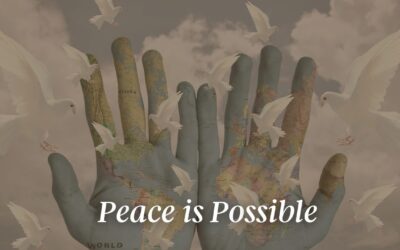 Greetings, world. I welcome you to LifeRocks. You think about it, let's talk about it.

I have seen them all over the world, those blue helmets which belong to the United Nations' Peace Keepers. I so appreciate them and salute them because they go into the most difficult situations as the UN charter says, "to save the future from the scourge of war." The United Nations believes in peace-making, peace-keeping, and peace-building. They’ve actually constructed an agenda of peace, because in peace-making you first go through diplomatic channels, and then peace-keeping right before enforcement you are attempting to create the environment by which there can be talks between warring parties. And then, of course, peace- building takes an entire system for the future.

Some important concepts inside the UN agenda for peace; they talk about mediation and conciliation as well as judicial settlement. I would like to move from the United Nation situation to perhaps the fundamental need of the human race, about peace with God and those concepts beautifully apply. Because unless you have peace with God, peace with man is not possible. You need the peace of God to reign in your heart, but that only comes after having established peace with God in the first place.

Peace with God and peace of God, they go together. Because in our status with God, we are like a warring party. We are in active enemy status. Then God needs to do something in order to change our status, otherwise He will never be able to be reconciled to us. Actually, a former United Nations secretary general said, “If you’re playing the role of a mediator you end up as a goat.” He’s right, because you’re a goat on both sides. That’s why God became a human goat. He sent His one and only Son, the Lord Jesus, to be the sacrifice, so that you and I can have peace with God. We want that fundamental matter of peace with God addressed—it takes a mediator. As one mediator between God and man, the man Christ Jesus. But when the man Christ Jesus died, He was actually representing God Himself, and there was a conciliation, a reconciliation happening. Because our sin separated and became the block between us and God, our active status as enemy had to be changed, and that’s what God did in the Lord Jesus. He changed our status from unreachable enemy to reachable friend. And all through judicial settlement, when the Lord Jesus became the goat to pay the price for us to be reconciled with God.

You want peace with God? The Lord Jesus is the mediator, the conciliator, and the one who provided for the judicial settlement, and now He offers Himself as the means for us to have peace with God and then have the peace of God. That’s why He’s called the Prince of Peace. The word “prince” can be used of a future King inside a royal family, like for example Jordan or Great Britain or Brunei. The word “prince” can also be used of a quality of a person when you say, “He’s a prince of a man!” But when the Lord Jesus is called the Prince of Peace, He’s talking about the prince being the chief, the leader, the establisher, the definer, the maker of peace—who not only defines peace, but can distribute peace. Who’s not only the author of peace, but is the architect of peace. He’s called the Prince of Peace because He can establish your peace with God, and then when you receive Him, you have the peace of God in your life. He’ll be your peace-maker, He is the peace-keeper, but best of all, He is also the peace-builder—The Prince of Peace.

You think about it, let’s talk about it.